As is my custom, I began decorating my home for Christmas the day after Thanksgiving.  For several years now, I have wanted a lighted wreath for my front door.  My problem: the builders of my home for some reason – though a brand name contractor of the Atlanta area – never installed outside electric outlets.  Although they did put a nice little plaque with their company name on it inside my coat closet.

Last year I looked at pre-lit wreaths that run on batteries and thought – that would be perfect!  But, since I already have four different Christmas wreaths I have collected over the decades in storage in my Christmas room, I just couldn’t justify adding a fifth.  Although one of them –that I made myself and is my favorite – is not suitable for outdoors.  So I guess technically I have three outdoor wreaths and one indoor one.  (See picture below).

Then, this year, I spotted battery operated lights while buying gift bags and tissue paper at the Dollar Tree.  It didn’t dawn on me until later that I could buy some of those and wrap them around a wreath I already had in storage.  Being at Walmart at the time, I asked and a clerk showed me some that were slightly higher priced but looked much nicer than those I saw at the Dollar Tree.  Besides, you know how we Americans are – if it is more expensive, it must be better.

I brought my package home, got out the simulated fir and real pine cone wreath I thought would work best, and was delighted it would wrap all the way around.  Then I looked at the little box where the batteries fit – and found the world’s tiniest screw that was diligently put into the smallest hole that opened the back of the box up into which the batteries were to be placed.  (See photo below) 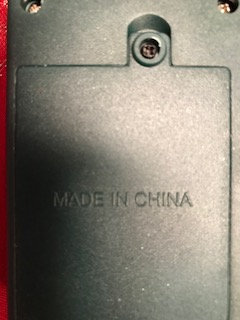 Now, as luck would have it, I happen to own one of the world’s smallest screw drivers.  So I dug it out of the junk drawer and tried several sizes to unscrew the box back.  (See photo below) 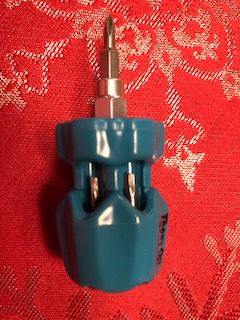 So, I whipped out my Home Depot card, went down to the store and bought the below.  (It is hard to see the lights – it’s not quite dark enough yet.  But they do light up with just four double AA batteries! )

This wreath “cascade” (which I got at a discount) was also made in China.  But it was very easy to install the batteries because the box which holds them is much bigger and has latches that open it – not a tiny screw in a hole.  (See Photo Below)

Now, I am not asking for the $2.97 I paid for the lights at Walmart back from China, even if it does add somewhat to the trade deficit Trump keeps clamoring on about.  I more than made it back on my Home Depot discount.

But, since you are looking to becoming the world’s leading, most progressive economic power (and never did I think I would be saying those words to a Communist leader), I just thought you might like to know so next year you can make those tiny screws on the battery-operated Christmas lights just a little bigger and easier to unscrew.

Either that, or you need to make a screw driver with a Phillips head that’s even smaller than the one I already own.

P.S.  Thanks for not backing out of the Parish Climate Agreement.  If it weren’t for people like you, Emmanuel Macron (who’s paying some of our bills to the U.N.) and Angela Merkel (who is apparently the new leader of the free world), I am not sure what would become of our country under this Presidential administration.  And I am so, so sorry we pulled out of the TPP.  That was a really dumb decision too, especially since economists have been saying since the 80’s that the Pacific Rim was where the next economic boom was going to happen.  Everyone who has ever lived on the West Coast knows that.  And if we just had a State Department left to speak of, I am sure we could come to some sort of agreement over the South China Sea and those pesky North Korean nukes.  After all, any country that can make the world’s smallest screw so no one else can take it out and actually use their product after they spent nearly $3 for it is pretty darn savvy, in my book.

A former newspaper reporter who has won awards for her journalism coverage and poetry, Ms. Johnson is a senior of the metro Atlanta area. She is the author of “Poems for Catholics and other Christians," available on Amazon Kindle. She is currently at work on her second book of poems and a memoir. Follow her on Twitter @CheryleJ0806 . View all posts by Cheryle Johnson